To reach Thailand and Hat Yai, the first big city after the border, we took the train! It departs from Penang (Butterworth) and takes about an hour to reach the border : Padang Besar which is also the terminus of the Malaisian line. After getting off the train, we had to go through the Malaysian immigration on the platform, and we found ourselves on the other side of the platform to buy a ticket to Thailand and go through the Thai immigration. We could have completely missed Thai immigration because there is no special path to follow and no barriers before taking the train to Thailand. We were a little worried about Thai visa because we had read on the internet that the visa issued at the land border is valid for only 15 days. And if you want a longer visa, you must do it at the Thai consulate in Penang or through an agency, and it costs 1100 THB / pers. (32 USD). But when we went to the consulate, an agent told us that as we are French we should not need to get this visa in advance and we normally should have 30 days given when we cross the border. However, he also added that it still depended on the goodwill of the officer. But finally, at the counter of the Thai immigration, nobody asked us any question and we got a visa to stay a month without paying a penny! Thanks to the French passport which opens almost all doors! (it is ranked 2nd to get visas in countries) 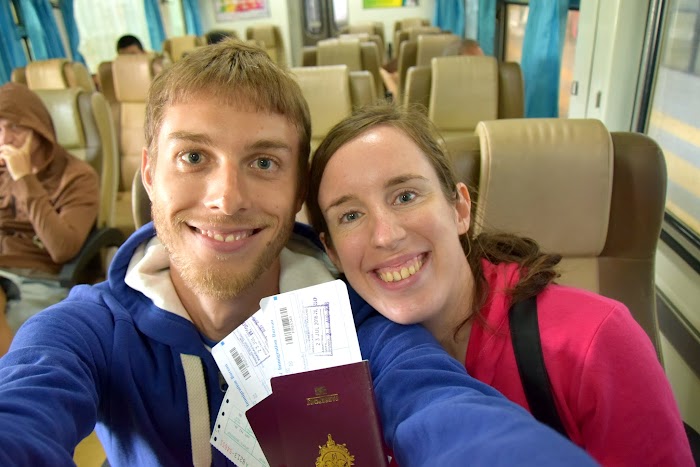 We jumped onto the Thai train, which reached Hat Yai in one hour. Hat Yai is the fourth largest city of Thailand and the biggest one in South Thailand. Our goal in Hat Yai was to buy a motorbike to continue more freely our journey in Thailand! Indeed we want to get off the beaten tracks and not go in tourist areas like Phuket, but discover more beautiful wild beaches and remote cities. And the only way to do that is to have our own mean of transport.

So here is a small guide to buy a motorbike in Hat Yai, Thailand:

In Hat Yai (as throughout Thailand) there are thousands Honda Wave motobikes on the roads, which facilitates their purchase but especially their maintenance (everyone knows how to repair a Honda Wave!). We decided to look for buying this model in second hand. But actually it is not that easy! Almost nobody speaks English! And during the four days we will spend here, we will see only two Westerners… Therefore Hat Yai really does not seem popular with backpackers. We wandered for several hours in the city in search of a shop. It is not super convenient to get around Hat Yai, there are tuk tuk but they are expensive (50 THB / pers. for only 1-2 kilometers, nearly 3 USD for two, in Thailand it is a lot). There are also kind of “buses” called “songthaew” which are pickup car with its back covered and 10 seats. It cost 10 THB / person. (30 cents) regardless of the distance, but they follow a defined route in town. So we walked a lot of kilometers to find the shops, and quickly realized that we were literally the only people to walk into town, everyone had at least a motorbike! Fortunately we found a city map at the reception of a guesthouse near the train station, and we also bought a prepaid sim card that allowed us to have Google Maps (270 THB, 8 USD for one month, with 1.5 GB of data), bought at the corner of Niphat Uthit 3 Rd and Niphat Uthit 3 Soi 2, not far from the Tourist Information Centre located on Niphat Uthit Soi 2 3.

Among the many Honda shops (beware that the shops open from 8am to 5pm and are closed on Sundays), we finally found one selling used models. But there were selling used bikes at 40 000 THB (1150 USD) which is very expensive for us! Our budget was rather 10 000 THB (bit less than 300 USD). Honda staff therefore managed to indicate us another shop 1 km away. This time it was a store that was selling a lot of models, but they were priced at 30 000 THB and the seller did not speak a word of English. A little frustrated we decided to make a lunch break. When going to the restaurant, we came across a second shop, this time with a elderly man who was able to speak a bit of English. Alex tried a Honda Wave 125cc, slightly old, at 16 000 THB, and small Suzuki at 10 000 THB which was full of sharp energy but also super old. The seller had also a nice Honda Wave 125cc at 25 000 THB, but we did not manage to negotiate the prices down. It bothered us to buy the Suzuki as there are far fewer stores where you can go if you have a problem. With Honda, we were sure to find someone to help us fix the motorbike. We decided to go eat (yes, because after spending an hour in the shop we were very hungry!), and think about the best solution.

Alex then found someone on Facebook who was selling his Honda Wave 125cc at 12 000 THB, and we gave him an appointment in the afternoon. He was a foreigner like us and he seemed to have taken good care of his motorbike. And moreover he was speaking English so he could explain to us how it works in detail. That was it, we had found our new companion! And here we are, owners of a small red Honda bought at 10 000 THB! This is an model full of experience, with a manual clutch, but it has its charm!

But it was not the end of our quest, we had also to find helmets and racks to tie our backpacks. Yes, there is no point to have a motorbike if we cannot not carry our luggage on it to travel. We bought good helmets and a basket to put in front for 800 THB. It was already late in the day and we decided to postpone to the day after our search for a rear rack.

Indeed, we were staying with Rupa, a Bangladeshi absolutely adorable who we loved to spend time with. We were so well received at her home, she cooked us Bangladeshi cuisine and we had long conversations, that will be the subject of our next article!

The next day, we went in search of the rack, stopping when seeing a motorbike shop. These are not so easy to spot because nothing is written in English and there are bikes parked everywhere on the sidewalks so it is not easy to determine if these shops sell motorbikes or if there are just customers who have parked their motorbikes to go to a restaurant or a barber. We finally found one and tried to explain our need of a rack, mimicking an increase of length of the motorcycle. We were redirected to another shop, Siri Big Bike, which proved to be the paradise of motorbike gear! Our little red Honda was not too huge match with the bikes that were in the garage, but the mechanics took good care of us and found a solution to solder a rack to lengthen the existing one by 40 centimeters. It took them a good hour to disassemble, solder and assemble, but after that our bike was ready to take us on the roads of Thailand!

And keep an eye on Facebook groups and Couchsurfing to find used motorbikes sold by travellers.
Note that when you are a tourist, you cannot buy a brand new motorcycle (you need specific papers such as proof of residence in Thailand, etc.).

One of the vendors told us that the bikes were cheaper in Chiang Mai than in Hat Yai, so we do not know yet how we will succeed in selling it.

Concerning the budget, when asking motorbikes shops, we were told that a second hand motorbike should cost between 10 000 and 20 000 THB, so we really wanted to stay around 10 000 THB. Finally with the equipment we have for now invested 12 200 THB.

What you must check before buying the bike : you get the Green Book which is what authorities need if they perform a check on you, and on the technical side : there is no liquid leakage, the carcass shows no corrosion, the headlights and flashing signals work well, the bike does not sound weird when you push speed a little, and especially, the motorbike brakes well. Honda Wave are known for their longevity.
However I can not write this article without warning! Although Honda Wave looks more like a scooter than a motorbike, driving a motorbike in Thailand requires a lot of caution, because the cars run at full speed and nobody is safe from accidents.

With our bike, we were much freer to move and we took the opportunity to drive up to the hill in the Municipality Park of Hat Yai to admire the view and the Phra Phutthamongkol Maharat, a huge golden Buddha, 20 meters high, which dominates the city.

It’s time to leave Hat Yai to begin our journey north. A month in Thailand will go fast and we do not know how long it will take for us to drive between the different cities we want to visit… So we hit the road this morning and made a stop in Trang tonight, before heading to the West coast. The bike has traveled the 150 km with all its little load without any problem!